Kirchhoff's circuit laws are two equalities that deal with the conservation of charge and energy in electrical circuits, and were first described in 1845 by Gustav Kirchhoff. Widely used in electrical engineering, they are also called Kirchhoff's rules or simply Kirchhoff's laws 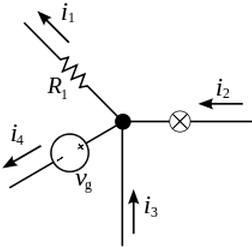 The current entering any junction is equal to the current leaving that junction.

This law is also called Kirchhoff's point rule or Kirchhoff's junction rule (or nodal rule). The more general form the law is stated as The algebraic sum of current at a junction is zero 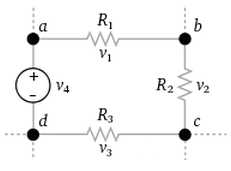 The sum of all the voltages around the loop is equal to zero.

This law is also called Kirchhoff's second law or Kirchhoff's loop (or mesh) rule. Another way to state this law is The sum of the emf's in a closed circuit is equal to the sum of potential drops

Equations 3 and 4 are equivalent as voltage is a signed (positive or negative) quantity depending whether it is emf and potential drop.

A voltage divider is a common configuration in analog circuits. It is also known as a potential divider. It is a linear circuit that produces an output voltage (Vout) that is a fraction of its input voltage (Vin). Voltage division refers to the partitioning of a voltage among the components of the divider. 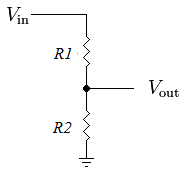 The two resistor voltage divider is used often to supply a voltage different from that of an available battery or power supply. In application the output voltage depends upon the resistance of the load (RL) it drives. 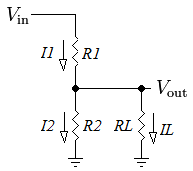 From KCL, we know that

However if IL (current flowing through RL) can be ignored, then I1 = I2 and the simpler equation \ref{vd} can be used instead. To find the relationship between I2 and IL

In practical circuits, where we can accept resistance tolerance of 10%, IL can be ignored if 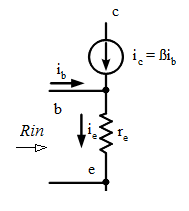 It is a common mistake, without taking into consideration ic, to assume that

However when we consider ic, and applying KCL

Then vre (voltage across re) is